I have an inexplicable drive to begin this review with some kind of expletive to hammer home just how insanely much I love these books . . . but of course none of the PG selections that would be appropriate in this space would get the meaning across. So, I tell you what—let’s just pretend that the words “holy cow” bear exponentially more weight than they do, and I'll begin with: 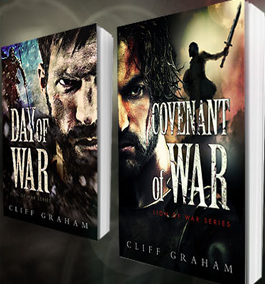 Holy cow, I love these books!

Mr. Graham takes his years of experience in the army (as a soldier and chaplain), his obvious passion for biblical research, his pastor's heart, and an amazing gift for telling a compelling story, and combines them to give us an in-the-trenches look at life in King David's army, particularly for David's Mighty Men (with particular attention to Benaiah and the Three).  The result is, at the risk of being redundant, amazing.

In fairness, though, I do wish these books had been written a little differently.

First off, I wish that I'd written them. Because this is how I envision the Old Testament stories as I immerse myself in them and I wish I'd been able to capture the larger-than-life-yet-accessible scope and feel. Failing that, I wish the timeline would have been different. Not the timeline of the story, but the timeline of the books themselves, such that Mr. Graham would have signed his contract with HarperCollins later or I would have signed mine sooner so that I might have been asked to endorse his work. I would like to have been one of the first people to gush over this series. As it stands, I'm way behind the curve.

So what's it like reading these books? I'm not going to apply some tired cliché about how they “made the Bible come alive” because that’s been said about countless other books and you’ve never read anything quite like this series. I'm afraid the flannelgraph depictions and Sunday school pamphlets have left us with something of a cartoonized version of many biblical characters and events. It's easy to forget that David and his men would have dealt with PTSD (although they'd have no category for it), with guilt and shame after killing many of their fellow Israelites, with doubt and disillusionment when it came to the God who had made so many promises, and with the temptations that come with life in that setting. Graham's portrayals bring all of this into focus without trading in the supernatural elements or the overwhelming sense of reverence for the God of Abraham, Isaac, and Jacob.

As someone who has studied the Hebrew language and the history and theology of the Old Testament for many years, I was a little tentative upon first opening Day of War, since I've seen a lot of biblical fiction drop the ball when it comes to the language, customs, etc. of ancient Israel, not to mention how many of them are filled with anachronistic weapons, tactics, and titles. Still others are faithful to the history, but come off as remote in every way and inaccessible to modern readers. To my relief, I quickly realized that Mr. Graham was not going to fall into either trap. He's done his research, but he doesn't show his work.

These books come in language we get. Graham describe archers “firing” their arrows (even though no one “fired” anything at all until the advent of gunpowder) rather than “letting them fly,” as Lawhead (another favorite of mine) insists on putting it. Men are said to “bleed out” and there are at least two references to someone seeking “closure,” but these modern terms are used sparsely and do nothing to detract from the story. Rather, they remind us that David's soldiers were not untouchable superheroes, but real men who could be physically, emotionally, and spiritually damaged.

There's apparently a movie in the works right now, about which I'm equally stoked and apprehensive. I mean, this story is screaming to be made into a movie, but you know how it is when you love the book first. Rarely does the movie live up to it. Thankfully, the author seems to be quite involved with the film-making process and can hopefully keep it from being either Hollywood-ized (and robbed of its biblical integrity) or cheesy-Christian-movie-ized (and robbed of its grit and reality). One thing's for sure: if they're true to the source material, it will be rated R.

Speaking of which, some readers might be offended by the graphic nature of the battle scenes.  I get this, and would encourage people with weak stomachs to give these books a wide berth.  (I won't be letting my son read these suckers until he's in his mid-teens.) Others might be put off by the level of poetic license the author takes. I would argue that these readers have no business picking up a work of biblical fiction (seeing as how such license is what makes these books distinct from Scripture itself). The author's notes make sure that we understand what's biblical and what's a fictional device and I, for one, loved the clever back-stories created for Uriah the Hittite and Ittai the Gittite. They really made the Bible come alive. (whoops)

I'm hoping I might be able to briefly chat with Mr. Graham at an event for authors and agents in September and tell him how cool I think his books are. Before that, though, I plan on attending a book signing in August, where I can hear Mr. Graham speak, buy a water bottle that says Cover Me In the Day of War up the side, and then stand in line to get my copies signed with a goofy grin on my face.

In short, these books rule and I recommend them highly if you're into . . . well, if you're into super-awesome, super-intense biblical fiction with tons of action and compelling characters. This is one of those rare situations where a book truly defies genre. It's not exactly historical fiction, it's not fantasy, and it's very different from most of what we call biblical fiction these days. I've heard this series described as “supernatural thriller,” a label which has also been used to describe my own writing. I can only hope that something I write will affect people as profoundly as these books have affected me.  They really are amazing.