An Article for the Climax of Holy Week 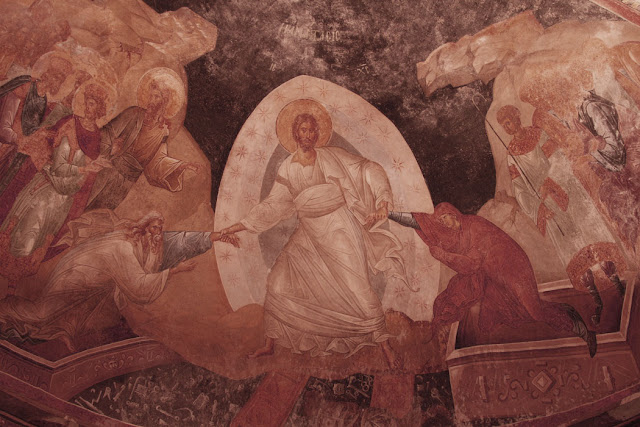 Satan enjoyed that Friday intensely.
He perched on the cross, watching the Son of God suffering and dying, sin piled on his boney shoulders, occasionally crying out in pain.
He crept up beside him to mock and jeer. He made his way through the crowd, throwing fuel on the fire of hatred and spite in the men who mumbled, “He saved others, but he can’t save himself” and shouted with a laugh, “Come on down! Then we will worship you!”
He enjoyed sticking his sword through the heart of Jesus’ mother who was weeping in a heap a few yards from the cross, while Jesus writhed in agony, seemingly helpless to put a stop to it.
And he enjoyed stroking the egos of the religious leaders standing at a distance, stirring up an almost sexual glee in their flesh as they watched their enemy finally get what he deserved.
When Christ gave up and died (the first on the hill to cash it in, the demons pointed out with a scoff), the Devil laughed himself hoarse. The sight of the King of Kings, slumped against that pole, his eyes vacant, the birds of prey already swooping closer and closer, was too hilarious for words.
The Christ’s hold—or what had remained of it—on this wicked planet had finally been broken. Decisively. It was now the exclusive property of the Devil and his angels. If Satan had any doubt of that, it was put to rest when he heard the news that the curtain in the temple was split in two (so long, “holy place!”) and a surge of supernatural energy had caused hundreds of people to start seeing ghosts all over the city!
The age of evil—unfettered evil—was now beginning.
Saturday was a field day for Satan. He was usually in a foul mood on the Sabbath, but not today; not ever again! He attended a Roman orgy, the stoning of a young child, and several pagan temple services. And between each, he made a stop back at the tomb of Joseph of Arimathea, where Jesus’ dead body lay at room temperature.
As for Jesus’ soul, it was in Hades with all the pitiful slaves of sin and objects of wrath who had died before him. How utterly stupid of God himself to become sin and tempt fate on a Roman cross. Didn’t he know that, to the Prince of Darkness, a cross was like a lyre in the hands of a skilled musician?
The Devil spent the evening curled up under the bloated body of Judas Isacriot, hanging dead from a tree. Treachery was a great dessert, and Satan lingered there, dreaming about what he would do to his slaves tomorrow.
Then came Sunday.
Satan first heard the report from a demonic foot soldier who had been skulking . . .
Continue Reading.
Posted by Zachary Bartels at 8:48 AM No comments:

Today, I am reviewing an incredibly important and relevant book, which you have probably never heard of. It’s called The Bible and Rockets to the Moon by Edward Boone. First off, let me apologize; you won’t be able to find this work anywhere, nor can you borrow my copy. But that’s okay, because I’m going to tell you everything you need to know about this little volume. Strap in; we’re going to hit 5 Gs. 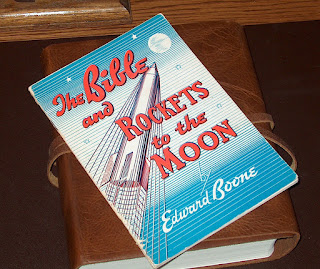 The book begins with the bold observation that, “Radio commentators, newspapers, and magazines have been talking in terms never before used in the history of the world.” This is conveyed as a bad thing, largely because recent achievements have been so far beyond the average citizen’s understanding that they “leave the human race groping in darkness like a blind man.” I know, sounds bad.

Oh, I should mention that this little booklet was written after Sputnik and Explorer, but before Neil Armstrong set foot on the lunar surface. And the “relevant issue” at hand is whether or not landing on the moon would be a sinful rebellion against the Almighty. I inherited this short, saddle-stitched volume from my late grandmother, who had a whole shelf full of similar booklets and pamphlets—some of them full of solid Gospel material, and a few of them more or less cookoo for Cocoa Puffs. I have no idea where she got them or what she thought of this particular book. Seriously, though; stick with me. I promise it really is relevant.

Mr. Boone attempts to use the Bible to build. . .

.
Posted by Zachary Bartels at 1:30 PM No comments: