Or if you're a purist, Happy Saint Valentine’s Day. Because, of course,  the Church originally set aside this feast day to honor two guys named Valentine (from the 2nd and 3rd Centuries), both of whom were killed as martyrs. (So if we want to be really pretentious, I guess we should insist on calling it “Saints Valentines’ Day.”) One was burned to death and the other, tradition tells us, was thrown to wild beasts. Yeah, I know—romantic! 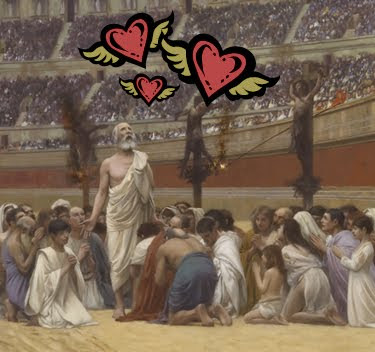 Unlike most sacred-turned-secular holidays (which have slowly evolved from purely spiritual observances into vaguely cultural excuses to sit back, eat, and drink), Valentine’s Day was pretty much hijacked all at once by Geoffrey Chaucer in the 14th Century. Chaucer noticed that “on seynt Volantynys day…every foul comyth ther to chese his make.”  No, that’s not a reference to chickens making cheese, and Chaucer hadn’t been drinking. Turns out everybody spelled things all janky back then. What Chaucer meant was that, during mid-February, every bird chooses his mate. Ya know, early spring, when a young bird’s fancy turns to love and all that. . .

As a result, the day formerly dedicated to the Sts. Valentine instead became a day for men to pronounce their love for women by writing poetically-charged letters (eventually known as “Valentines”). The day has been so entirely secularized that, in 1969, the Catholic Church erased it from their religious calendar (even while they continue to make a case for St. Patrick's Day being spiritually grounded). These days, I would think it all but impossible to find anything pertaining to the original celebration of St. Valentine’s Day in any store amongst the $5 cards, lacy red underthings, and boxes of mediocre candy.

In a way, this is a picture of what the world has done to love itself. We’ve taken it from a spiritual act, which we are bound to apply to our families, neighbors, and our enemies alike, and turned it into sensuality—a “feeling” which may come and go, and which we follow around from person to person.

Of course, I Corinthians 13 has a context—a place in the flow and development of Paul’s first letter to the church in Corinth—and in order to really understand the chapter fully, you’ll need to read the whole thing and get your mind around its place in the whole. Still, we can benefit from looking at this composite picture (not exhaustive definition) of love and asking the question: as a Christian, is my life painting the same picture? After all, Jesus said that the world would know we are his disciples because we love one another.

“Love is patient. Love is kind. It is not self-seeking.” That pretty much drops a bomb on the cultural view of love as something we feel, something we follow around, that search for the “perfect someone.” Love doesn’t withhold until the perfect someone shows up. Love is patient and kind; biblical love is not discriminating, not focused on what I get out of the deal. Futher, “Love does not envy or boast” refers to the inward (“I want! I want!”) and outward (“I have! I have!”) manifestations of self-seeking. These things are foreign to biblical love.

“Love keeps no record of wrongs.” When two people (whether friends, co-workers, or spouses) are always updating their mental grievance files, in anticipation of the day they can run down the list and announce, “Here’s all the horrible stuff you’ve done,” that relationship is not firmly based in love. Those lists exists solely for self-seeking. That’s not patient or kind.

“Love does not rejoice in evil.” Most of what Hollywood calls “love” is the very opposite of love, because the silver screen continually rejoices in evil (the breaking of God’s Law) even while labelling that wickedness “love.” (This has led to the absurd situation where people who celebrate actual love are called “haters.”)  I’m always disgusted when a film or television show will present two people as having slept together for some time and then one of them finally takes the leap and says, “I love you.” And we’re all supposed to be touched. That’s not biblical love. Love is patient and love does not rejoice in sin, but in Truth.

Sure, romantic love is its own animal, and should probably be discussed according to its own attributes, but unless romantic love is rooted in sound biblical love—the kind of love that should mark a Christian’s dealings with everyone in his or her life—then it is not truly love; it’s not that thing which never fails, which always remains faithful according to Scripture. The kind of love that empowered two men named Valentine to go to their deaths for the sake of the Gospel.

Even as we enjoy the cultural aspects of a cultural holiday, let me encourage you to inventory your love life at large. Are you loving your friends, your neighbors, and your enemies with the kind of love we see in Scripture, that Christlike love that puts others first and self last? If not, what a great opportunity St. Valentine’s Day gives us to ask God to continue breaking our fleshly ideas about love and replacing them with the real thing.

Email ThisBlogThis!Share to TwitterShare to FacebookShare to Pinterest
Labels: love

How To Know You Should Write Suspense 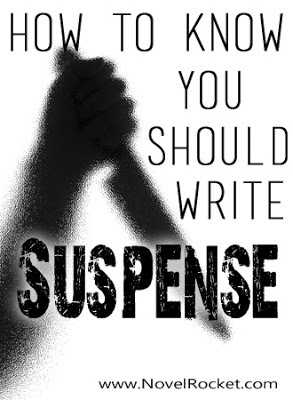 Rapid Fire Suspense author Ronie Kendig recently put together a compilation of a number of suspense authors (including Brandilyn Collins, Colleen Coble, DiAnn Mills, Carrie Stuart Parks, Melody Carlson, and yours truly) taking a stab (heh) at identifying that one primary indicator that you should be writing suspense!