So, I’m reviewing this movie largely from memory. I saw it in 1997 when it first came out. I was a college sophomore and I remember thinking it was a decent movie with some very interesting biblical themes running through. Of course, as a biblical studies undergrad, I saw Scriptural themes everywhere. Well, last night my wife and I fired up this ’90s Al Pacino HOO-ah fest, only to find that I was decidedly wrong about the “decent” part. About halfway through, it decided to morph into what we used to call a “dirty movie” and we decided to turned it off. The sad part is that I didn’t even remember all that, desensitized as I had become to such things in cinema.

What I do remember, however, is the ending. And just to make sure, I watched it again on YouTube. Below, then, is my review of The Devil’s Advocate (which I recommend skipping), based on my cobbled-together half-viewing last night, my unfortunate full viewing fifteen years ago, and various clips of Pacino’s soliloquy at the climax of the film.

Why bother to review it all? Partially because I don’t want to miss two weeks in a row and partially because there really are some valuable concepts about the Enemy contained therein. It’s just a shame they gave him equal time. 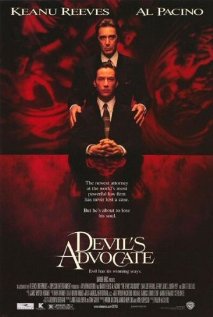 I'd bet five thousand dollars that someone at Warner Brothers came up with the title of this thing before they dreamed up the plot.
“What about a movie called The Devil’s Advocate? That would look great on a hat!”
“Sure, but what would it be about? Like, someone is a lawyer for the devil? Does that really make sense? Ah, who cares? Let’s do it!”

Apparently, the first draft was an effects-driven, storyless blockbuster. But then, according to IMDb, the original script had to be re-worked, toned down, and re-pitched to Pacino several times before he signed on to the project. Somewhere in that process, the story became strong enough to justify its existence. Parts of it are subtle, even.

But parts are not (and I’m not just talking about the gratuitous sexual stuff). For example, the movie begins with a black screen, then fire flares up over the black screen, then a red title in nineties horror-movie font on top of that. And you’ve got to be kidding me with Pacino’s Devil calling himself “John Milton” (with a couple quotes from Paradise Lost thrown in just in case we were too thick to catch on).

And then there are the effects that they did use. While Keanu and Pacino talked on the safety-rail-free waterfall balcony, I was thinking “Fifty-seven million dollars to make this movie and they couldn't make their Manhattan backdrop look more real? And, seriously, there's no wind way up there? Not even enough to move their hair a little bit?” But then I read that they used a real eighth floor balcony in New York City, so I don't know what to think. Which I guess kind of fits the theme of the movie.

And speaking of not-subtle, the story opens with Keanu's character defending a man charged with molesting a teenaged girl. While she gives an account of what happened, Reeves's character notices his client obviously (and disturbingly) reveling in the memory. I guess that’s in there to remind you of how defense attorneys have to continually lay aside their integrity and enable the wicked acts of wicked people. Although that's a weird theme in a movie about the Devil, who is pictured as the prosecutor in several courtroom scenes throughout Scripture, and whose very name means “The Accuser.” I guess it would have been harder to scare up a story where the devil is a DA (which could stand for...waaaait for it...Devil's Advocate), but I think it would have been worth the extra work.

Merits and Demerits
On the whole, the production and acting were better than I remembered. Keanu's Southern accent isn't even that bad (surprisingly better than the uber-talented Theron's), although it does occasionally disappear.  There is great chemistry on-screen, until those scenes where the filmmaker takes the lazy way out. And the script was obviously punched up by someone with a knack for dialogue. (“And the black thing, you bein' black...that's just priceless.”

Still, some of the supporting characters are a bit two-dimensional. (I realize how that sounds when discussing a movie whose main character is literally the devil, but come on...) Keanu's mother could have been a really rich and interesting character for the viewer to try and figure out.  But they leave nothing to figure out, overdoing the Southern folksiness of her character, slapping a big ugly sweater on her, appliqued with a bird house and heavy laden with button pins (literally, pins decorated with buttons) and a large cross necklace. She talks with that annoying I'm always annoyed tone that one associates with religious characters in Hollywood productions. Of course she can't just be a regular woman who goes to church and is concerned for her son. Does such a person even exist?  No. Fanatic or secularist: those are your options.

To keep with my running theme of the Nineties and their ups and downs, this particular specimen is pretty dated by its nineties fashion and flavor, without reaping many of the benefits. Check out Keanu in a bar in rural Florida with his white T-shirt, jeans, and suit coat. And then, in the next scene, we see him wearing the rest of that same suit in court in New York. What a versatile time.

Furthermore, while he's always amazing, something about Pacino's performance hasn't weathered the intervening decade and a half very well. It wasn't bad, it's just that...now and again, he seemed to be doing a Michael Scott impression. That's the best way I can put it.

I also found myself a little distracted by the casting choices for the supporting roles. Not that people did a bad job, but for a borderline horror movie that takes itself really seriously, they sure stacked the deck with some actors known for less-than-serious fare. For example, apparently Craig T. Nelson (that's right: COACH) murdered his wife, stepson, and a maid. Riiiight. And the guy who plays Guffman on Waiting for Guffman is a higher-up at the Devil's law firm, as is Jeffrey Jones (best known for playing Principal Ed Rooney, foil to Ferris Bueller, and who also appeared in the two worst movies ever made: Howard the Duck and The Pest).

Biblical Themes
Things start out promising when Keanu (his character's name was Kevin, but, when he's not Neo or Ted, he's Keanu, amIright?) meets his mother at her church and we hear the congregation singing, “The God of peace will soon crush Satan Under Your feet, Romans 16:19-20” (yes, the Scripture reference is part of the lyrics), which is a key text to developing a biblical doctrine of Satan. Unfortunately, they don't really bring it (the Scripture or the concept) up again.

The rest of the good stuff comes from Pacino's lips, from the moment we meet him. Some highlights:
And let me break off the bullets and say that maybe this↑ is the best lesson we can take from this film, which starts with the replaying of a disgusting crime against a child in a courtroom, then drops in Coach, Guffman, and Principal Rooney. But did you know that Jeffrey Jones (who played Rooney and the foppish emperor in Amadeus) now resides on the sex offender list?

Now, I normally include a little section of  “Best Scares” in these reviews, but The Devil's Advocate doesn't really play out that way.  I do have a murky memory of Keanu's (possibly schizophrenic) wife finding a baby in her house and then realizing the baby is playing with intestines of something. That's sort of scary, I guess. But we didn't get that far. I remember it being chilling and I remember the end being satisfying, and I kind of wanted to push through and see it.

I mean, really, what's the big deal? It's just a little skin. Or maybe a lot.

Are we negotiating? No, not this time.