You Changed My Title.

So I'm experiencing all this Big Publisher stuff for the first time, firsthand. (My wife works for a major publisher, frequently from home, so I've watched much of the process from a detached distance many times over.) You tell yourself you're going to be ready for the editor's notes and the possibility that they might change your title and not like your cover concept, and you're going to be the least-difficult author they've ever had.

But then it actually happens. And you feel the little man who lives in your ego poking his head out, saying, "You're wrong; all my ideas are perfect."  <sigh>

The title I wanted for my book was Demoniac. I thought it was punchy, evocative, memorable, etc. They thought it sounded like a horror story (when it's actually a character-driven suspense-slash-action-slash-comedy with supernatural elements). They also thought people would have a hard time pronouncing it (is it a long or short O?) I hated their first alternate suggestion, but tried to get used to it. Then I finally told them I hated it and together we came up with a title we can all love.

The new title is Playing Saint.  It's got layers of meaning (i.e., the main character Parker Saint is acting the part of a Christian and someone else is "playing him" as well). It's punchy, it rolls off the tongue easily, and I think it's fairly memorable.

And here's the thing: it's way better than Demoniac.

The same thing is true about the notes I received from my editor and a freelance editor. Some of them would have changed the essence of the story, so I pushed back on those. Others were obviously great ideas. Still others needed some time to digest and some back-and-forth to refine.  But at the end of the day, it will be far better. The book on bookstore shelves next October will be far and away better than the book that would have existed if I had gone the self-controlled imprint route again.

You may be worried about getting tied to an agent and submitting your work to publishers, afraid that you'll lose control and what comes out at the end of the day won't really be you. But the truth is that it will be the best version of you it can be.

And I think, especially for a Christian, the exercise of letting go and listening to others and letting them improve you, is a vital one and will serve us well in developing our character and refining us as people and as disciples.
Posted by Zachary Bartels at 10:09 AM 3 comments:

Remember that one book that every high school and college-aged Evangelical female read during the nineties, called I Kissed Dating Goodbye? Remember Seinfeld? Ever wonder why no one had tried to combine them?

Click here to read our white paper, I Kissed Lanie Goodbye: What Evangelicals Can Learn from the Relationships of Seinfeld’s Elaine Bennes. 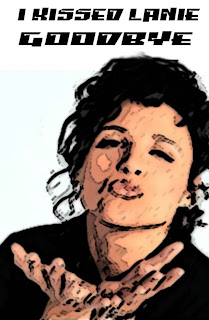 Posted by Zachary Bartels at 7:04 AM No comments: