Okay, that's a little obscure, isn't it?  It's lyrics from a song called "Social" from the best part of the Nineties, which fits because A.) It's Halloween, and B.) this post is about social media.

Namely, my social media. Know this:

1. I got on Pinterest against my own better judgment, expecting it to be full of nothing but recipes and makeup tips and for the woman-man ratio to be tilted toward the feminine more than the last two Christian writing conference I went to.  But here's what I learned: Pinterest is straight-up FULL of men pinning pictures of guns, cars, gadgets, sports stuff, and of course pretty girls (which reminded me that of course Pinterest is heavily populated by men--they were the original pinner-uppers).  Anyway, I've got like seven boards going and I find the process to be insanely cathartic, if time-sucking, muck like Flair was on the good version of facebook in like 2005 (also: remember Flair???). If you want to check out my boards, they can be found here.

2. A few months ago I had started #another100daysofrandombandnames on Twitter (see my first #100daysofrandombandnames here) and then let it fizzle out after only fourteen.  Well, now I've got them scheduled up through fifty. Make sure to check my Twitter @AuthorZBartels every day for the newest, greatest randomest (I know that's not a word, or a coherent concept) band name.
Posted by Zachary Bartels at 6:05 AM No comments:

How to Make a Book Signing Interesting

A month before my book came out, the events coordinator from favorite book store in the world (Baker Book House in Grand Rapids) contacted me to ask if I would be interested in doing an in-store event for Playing Saint after it came out.

I was sort of torn; while my buddy Ted and I had done an event there for our book Kinda Christianity, which went fairly well, I had the standard fear of being the sad author sitting all alone behind a folding table with a stack of my books. They've actually done a great job of promoting it and a few carloads of my parishioners are making the trip, so that's covered, but that still leaves the question: in the Internet age, how do you make a book signing worth the trip?

I've been thinking about that for a few weeks now, and I think I think I've put together an odd enough agenda, as well as a decent assortment of prizes (beyond copies of my own book) to make it fun, funny, and memorable.  However, if you have any additional ideas for what elements would really make a bookstore event, feel free to let me know in the comments below.

If you're anywhere in the vicinity, you should totally come. Pics to follow.
Posted by Zachary Bartels at 5:05 AM No comments:

If you haven't picked up a copy of Playing Saint yet (and why wouldn't you have? The ebooks is on sale for $2.99 until Halloween), you should probably go buy a copy right now. Or, if you're the kind of person who who'd rather win keep on entering until he/she wins, here are some opportunities to win the book: 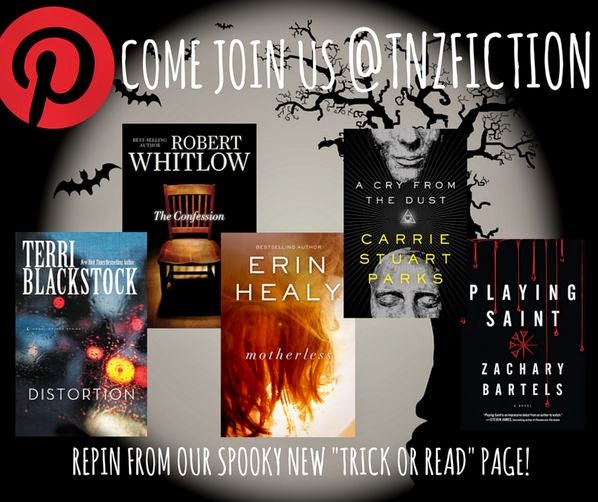 Posted by Zachary Bartels at 4:40 AM No comments:

Today, I was interviewed by NYT Bestselling author JF Penn. 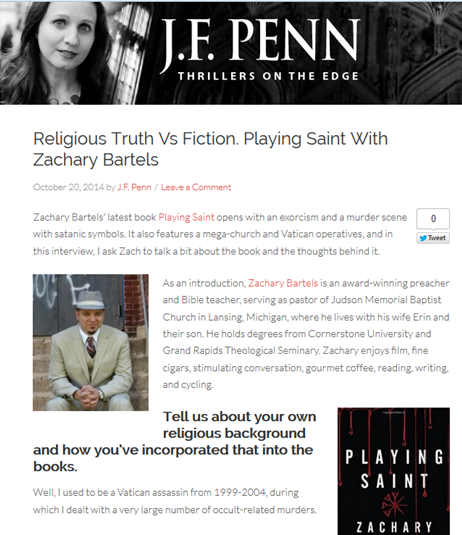 Click here to read the rest of the interview.
Posted by Zachary Bartels at 10:34 AM No comments:

I continue to be very excited about my debut novel Playing Saint, which is now available at bookstores everywhere and at pretty much any online bookseller you can think of. I'm going to be sharing some of the early media I've done on the book over the next few days. I'm ecstatic about the chance to spread this story and this message:

To kick it off, here's an interview I did with Burke Allen on BlogTalk Radio, in which we talk about the modern megachurch movement, secret Vatican operatives, relics, and the theology of the cross.


Check Out Books Podcasts at Blog Talk Radio with Allen Media Radio on BlogTalkRadio
Posted by Zachary Bartels at 10:11 AM 1 comment:

This is a New Thing That I Do

When I'm bored, I make little doodles of John Calvin as a deadly ninja assassin. 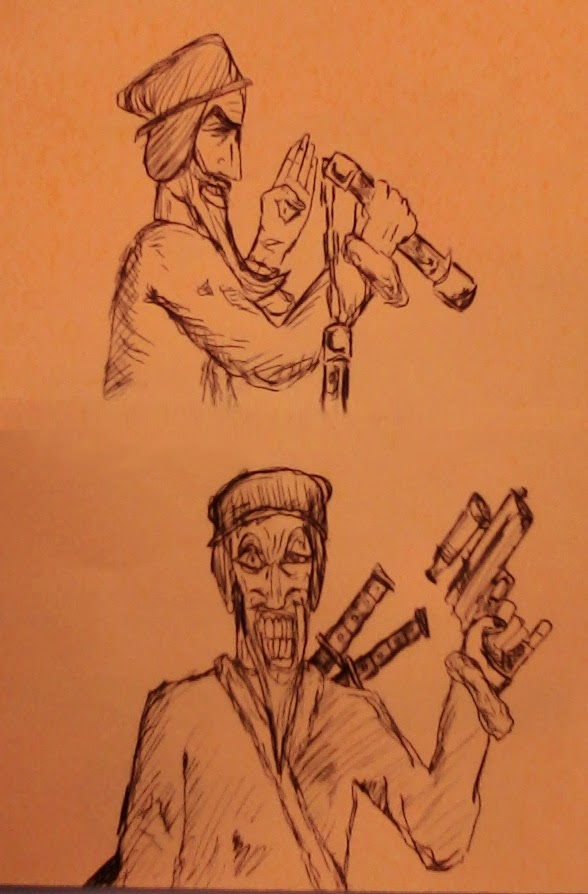