Last week, my son and I went to see Frozen in the theater. I'd only seen the teaser trailer with the living snowman and the dog-like reindeer, so I had little idea what it was about, but it looked like fun. It turns out it's about a misunderstood, quirky princess who feels like life in the palace is keeping her back from truly expressing herself (Cf. every Disney movie ever).

You should stop reading here if you want to avoid spoilers, as I'm about to jump right to the climax of the film. The queen's magic power-slash-curse has frozen the whole kingdom in an eternal winter and accidentally frozen the heart of her sister, who is now about to die as a result. She's been told that only an act of true love can melt her frozen heart and save her life. 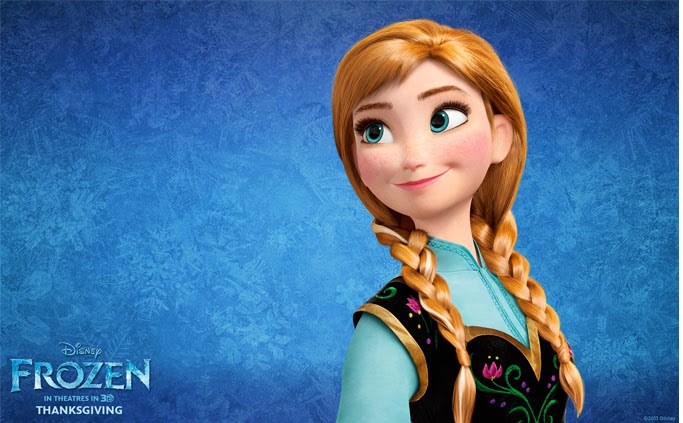 Of course, the guy she thought she was in love with is really pretty evil and the "fixer-upper" guy she's been adventuring with (named Kristoff) is clearly her true love after all. The snow clears just long enough for them to see each other, and they are closing in for the kiss.

That's when my pastor-brain clicked: what a great sermon illustration this would be! Not unlike The Matrix when the kiss of Trinity brought The One back after he sacrificed himself, this would be a picture of how Christ (duh, Kristoff as Christ a la The Truman Show) saves us from the terminal ice in our hearts, etc., etc.  But then Princess Anna saw her sister about to be killed by the Surprise Bad Guy and she veered off course, thrusting herself in the path of the sword, turning to ice just in time to stop the blade and save her sister. The sword shattered (for some reason), and my pastor-brain started trying to spin this in a way that would save the potential sermon illustration.

Before it could, though, Anna turned back into flesh and bone, saved by her own act of love, rather than the love of Christ(off).  Then the whole eternal winter (see "curse of sin," a la The Lion, The Witch, and the Wardrobe) thawed and everyone was saved. What a shame: another humanist message encrypted in a children's show, designed to teach kids that the Answer lies within themselves. It sucked that it turned out to be a borderline-satanic story because the music was amazing, the story compelling (by Disney standards), and the jokes side-splitting. Oh well; file it under "anti-Christian propaganda" with most everything else. Right?

My brain started filling in the details: the Ice Queen had created life (at least two sentient snow creatures) and we had seen her holding an orb and scepter, like many Gods (including Christ) have been portrayed, and her father wore a Maltese cross with a dove on it. All of this points toward: you don't need Jesus; you can save yourself. In fact, hadn't she kind of saved God? Now I was getting mad.

This all happened inside my head in less than a second. It doesn't take any time or thought because the neural pathways have been well-worn by a lifetime of similar paranoid thought all around me in the Church: from back-masking records in the eighties to sounding the alarm re: Harry Potter and such more recently. Everything that's not explicitly Christian in message is fair game to be called out as the very opposite.

But WHY? This is exactly the kind of revisionist reader hermeneutic the Church has been railing against in recent years; so why do we selectively reinforce it? Because here's the thing: much like AC/DC never stood for "Against Christ, Devil's Children" (in fact, the name came from the side of a sewing machine!), Kristoff was not named such in order to be a Christ figure, but as an homage to Hans Christian Anderson, who wrote The Snow Queen (along with Characters Hans and Anna). I was importing the very stuff that was raising my ire.

It would be just as easy to go in the other direction: Ilsa, the princess, has been cursed from birth with a dreadful disease that turns everything to ice. After fighting it for most of her life, she gives in to it and embraces it as her identity (singing, "I can't hold it in any more...no right, no wrong, no rules for me...") only to find that this makes everything a million times worse. She is about to perish when she is saved by an act of self-sacrifice, followed by a resurrection. Well, from that angle, this sounds like a downright Christian story!

But it's neither. How about we just let stories be what they are, say what they want to say, and entertain us? If a story is well-told, it glorifies God who gives us the gift to write, read, and appreciate story. And unless it blatantly promotes sin or a false Gospel, we can probably enjoy it for what it is with profit. Rarely does children's fare stray beyond the odd fart joke and, honestly, the intentionally anti-religion stuff (like The Golden Compass, alt title: The World's Least Original Book/Movie) is so rare at this point that we can probably dial back the conspiracy-minded paranoia.

If you haven't seen Frozen, you should go see it soon, even though I already gave away the ending. We braved the epic snowpocalypse after church today and the whole family enjoyed it, this time in 3D! It was even better the second time. I'm glad I didn't let my pastor-brain run out of control on me and taint a really great story, even though we had to deal with a three-foot snow drift over the car upon exiting the theater. Worth it.

The cold never bothered me anyway.