A Dozen Years of Christmas Sermons

Click here to access a bunch of my Christmas sermons through the years. Hope they bless you this season! 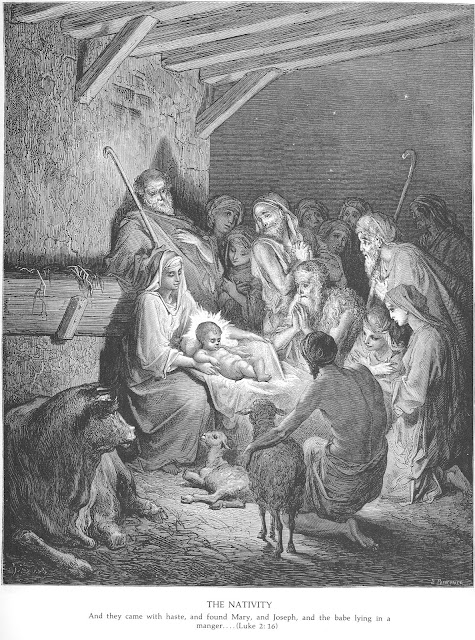 Posted by Zachary Bartels at 2:06 PM No comments:

So we decorated our church for the season on Sunday: Christmas trees, wreathes, candles, and lots of nativity scenes. Honestly, we probably have enough of those to put one in every room of the church building, and we nearly did.

Last night, though, as people were getting coffee and hot chocolate before the Wednesday evening service, my son Calvin surveyed the nativity scene in the back of the chapel and asked, “Where’s Jesus?” 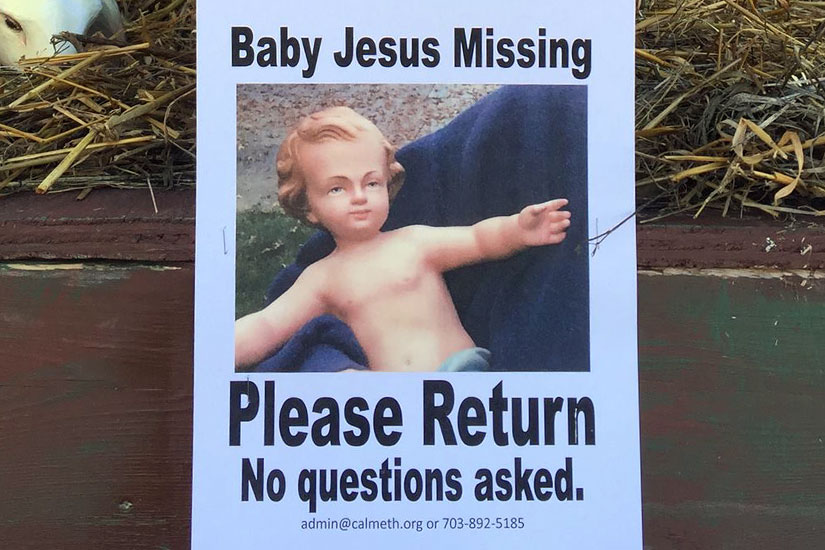 Sure enough, Jesus is missing. Everyone else is in the proper place. The Virgin Mary is looking down into the manger, gesturing grandly—at no one. The shepherds are there to adore the empty manger and the magi are well on their way, hopefully braced for disappointed. It’s sort of funny-sad.

Calvin himself has a nativity scene (or, as he used to call it, “activity set”) that remains out in his room year-round. It’s the kind that was hand-carved in Bethlehem and, I think, purchased at one of those kiosks in the mall. It’s missing a few people as well. I think there are two kings and one other guy who has to pull double-duty as both a shepherd and Joseph. But at least the baby Jesus is present and accounted for.

What happened to the Jesus figure from the chapel crèche? Who knows… Could have been packed in the wrong box. Maybe someone dropped it last year and it shattered into a dozen pieces. Or maybe….someone stole it.

Stay with me here. “Baby Jesus Theft” has become such a common thing that it even has its own Wikipedia page, which describes the phenomenon thus: “Baby Jesus theft is the theft of plastic or ceramic figurines of the infant Jesus from . . .  public and private nativity displays during the Christmas season. It is an ‘enduring (and illegal) practice’ according to The New York Times journalist Katie Rogers, ‘believed to be part of a yearly tradition, often carried out by bored teenagers looking for an easy prank.’ The prevalence of such thefts has caused the owners of outdoor manger scenes to protect their property with GPS devices, surveillance cameras, or by other means.”

According to the rest of the article, dozens of large, full-size community nativity scenes have had their bambino swiped in the past ten or so years . . . including the baby Jesus from the National Christmas Creche in Independence Hall. Even though it had been bolted down. Other incidents include: “In 2008, a Baby Jesus was stolen from First United Methodist Church in Kittanning, Pennsylvania and replaced with a pumpkin, and, in Eureka Springs, Arkansas, a thief not only stole the Baby Jesus from a public display but absconded with the concrete block and chain that was supposed to act as a deterrent.”

Seriously, we’re chaining Baby Jesus down to a cinder block—as if we’re about to send him “sleeping with the fishes”—and even that can’t keep our nativities whole.  Other churches have organized 24-hour prayer vigils, which are actually thinly-veiled 24-hour guard services. “Pray with one eye open, guys . . . ”

All of this, of course, can preach itself. We live in a world that will happily celebrate Joy and giving and Peace on Earth and other vague Christmas-ish notions, but is eager to ditch Jesus at the first opportunity. Even as an hours-old infant, this Jesus is already dangerous and offensive to the sensibilities of our culture.

Maybe ten years ago, I started noticing yard signs popping up, bearing the common slogan, “Keep Christ in Christmas.”  I’m never 100% sure what that means. Is it anti-Santa propaganda? For some, I think it started as a call to avoid the shorthand “X-mas” (which, by the way, is rooted in the fact that the name Christ is “Χριστός” in the Greek, often shortened to X), before morphing into a campaign against the greeting “Happy Holidays” replacing “Merry Christmas.”

But these things are all a distraction. Whether the world says, “Happy Holidays,” “Merry X-mas,” or “Merry Christmas,” the Jesus at the center of it all is surely fading away from the public consciousness. And it’s our job as the church to proclaim the real reason he came. Not for a vague, contextless sense of “peace on earth, good will toward men.” But rather, to bring peace to earth by becoming one of us, living a perfect life (when we could not), dying a sinless death (so we could live), and rising again—so we can follow him from death to everlasting life!

It’s glaringly obvious when a nativity scene lacks a baby Jesus; particularly, because it happens all at once. It wouldn’t work to gradually steal the babe from the manger, a bit at a time, over the course of many years. But when the work of Christ is slowly replaced with generic good vibes, it’s less obvious. At Christmas and all year around, our job as the Church is to not let that happen, to keep pointing people to the cross and the empty tomb. To leave people only two options—take Him or leave Him—and prayerfully walk them toward receiving Christ.

After all, “Keep Christ in Christmas” has a real ring to it. But at this point, perhaps our real battle cry should be, “Keep Christ in Christianity.” In Revelation 3:20, Jesus portrays himself as locked out of his own church. He stands there at the door, for a time, and knocks. But the people inside don’t seem to even notice that he’s missing. I imagine that, at Christmas time, all the little mangers are empty too.

Maybe one of your nativities is missing a Jesus as well. But but may your mission always be to keep Christ at the center of everything—through the Christmas season, into 2019, and beyond. From your work to parenting to relaxing to proclaiming the Good News, let us always keep our eyes on Him, not as a round-the-clock watch to keep a  fiberglass figure from being stolen, but as believers in Christ, dedicated to following him in every area of life and ministry.

Posted by Zachary Bartels at 5:27 PM No comments: 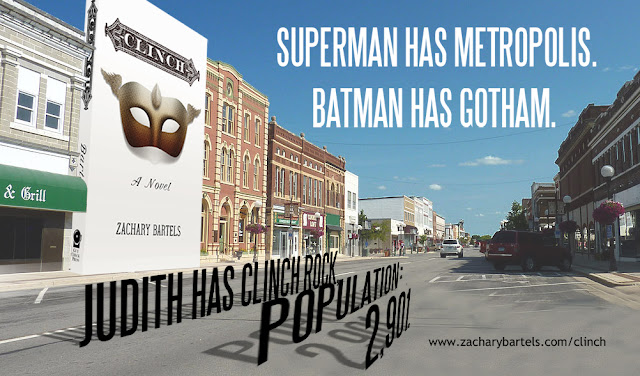 Click here to buy a copy of Clinch: A Novel as a paperback or ebook.

Posted by Zachary Bartels at 12:02 PM No comments:

Believe (in) Me | This Week's Sermon 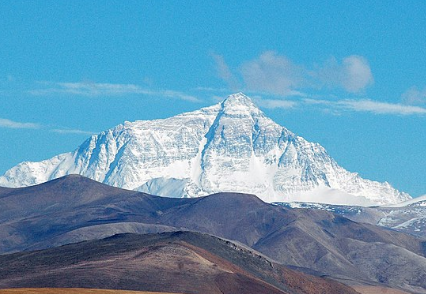 Posted by Zachary Bartels at 1:58 PM No comments:

One of the sharpest shifts in our society recently is that the average person on the street now knows nothing about the Bible. When I was a kid, even the "unchurched" (I'm not a huge fan of that term) knew basic Bible stories and a few verses.

Today, though, people only know ONE. "Judge not, lest ye be judged."

But what does that really mean? Stephen Altrogge wrote a great post on the topic, which I highly recommend. You can find it here: Judge Not Lest Ye Be Judged.

Posted by Zachary Bartels at 6:19 AM No comments:

1. “Podcast Week was in November. It's over.”
And to that I say, I've only posted once since then, so podcast week never really ended.

2. “Another podcast? You already had, like, three!” And to that I say, now I'm on four. I’m geeked to be co-hosting These Go to Eleven with my boy Nathan Bell!

Unlike the Gut Check Podcast, we discuss not just pop culture, but current issues, church life, practical theology, etc. And sometimes the Rev. James King pops by to excoriate us. My first ep dropped last night and I am greatly looking forward to many more to come.

You can follow on iTunes, and pretty much every other podcast app and aggregator, or on the web.

Name: These Go to Eleven
Feed Location: http://www.11podcast.com/feed/rss
New Eps Drop: Every Tuesday night, timed so that each ep goes to 11:00. (Get it?) 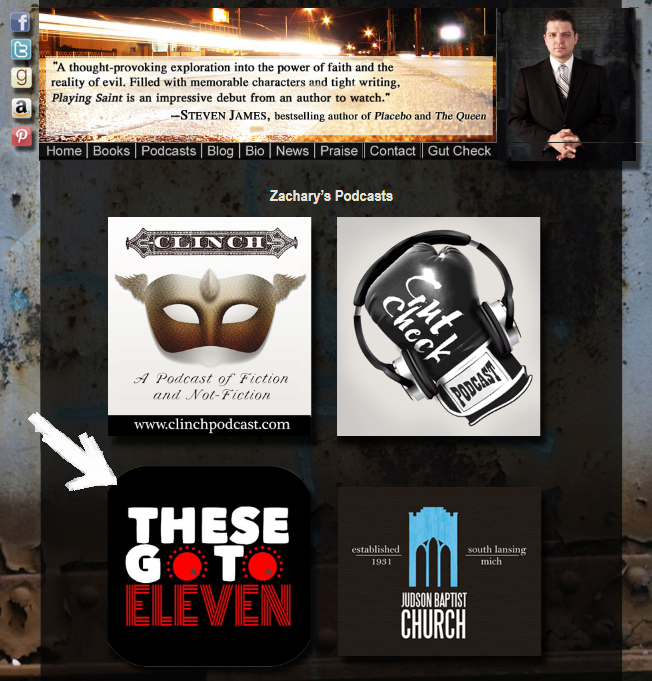 Posted by Zachary Bartels at 6:23 AM No comments: