So Here's the Big Announcement...

For  a couple weeks, I've been making dodgy references to some big news regarding my novel Demonic. Well, here it is:

Today, I signed a two-book contract with Thomas Nelson Publishing, the first of which (tentatively titled Demoniac: A Novel) will come out in 2014, followed by another suspense novel the following year.

I'm beyond excited to be working with the world's largest Christian publisher, which was founded while George Washington was alive and has, in more recent decades, put out the majority of my favorite fiction. (In fact, now that they've merged their fiction division with Zondervan's, I'd estimate that the resulting entity publishes a good 80% of my favorite novels, including some Lawhead, Peretti, and Cliff Graham).

I'd say it's “humbling” to join such prestigious company, but that would just show that I don't know what “humbling” means. I mean, if my books tank, that'll be humbling. At the moment, though, I'm flying pretty high.
Posted by Zachary Bartels at 4:58 PM 5 comments:

What you'll see on this blog over the next few weeks:

Short Film and Being a Renaissance Man

I'm thinking about short film lately, because A.) I just read an awesome screenplay written by my boy Ted Kluck, which is in pre-production and will likely star an actor of considerable note, and B.) I just watched a short film called ...Forgotten Detroit, which I helped (at the lowest level) to Kickstart about a year and a half ago. 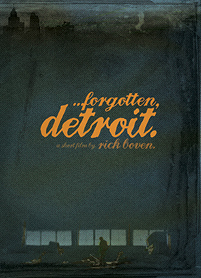 So, here's specifically what I'm thinking about in terms of short films: their resurgence is one of the many blessings brought to us by the omnipresence of the interwebs and the ease-of-access that we now have to video in a variety of formats. I mean, think about it: all other things being equal, there ought naturally to be at least as many short films as there are features. Because, just as short stories and novels are related-but-unique literary forms, a lot of stories that demand to be told in an audio-visual format would suffer greatly if someone tried to stretch them out to an hour and a half or two hours. (Heck, half the 2-minute movie trailers I encounter today seem like the trailer is a more fitting length and format for telling the story than the full movie).

But, whereas there have pretty much always been periodicals, anthologies, etc. (not to mention early digital forms like BBS's and dial-up connections) as means of getting one's short stories into the waiting hands of consumers, it's taken the very recent proliferation of high-speed Internet to give any real distribution oomph to short films, because let's face it, with few exceptions (Rob Bell's Nooma videos, for example), most people aren't going to shell out enough money for a fifteen-minute film to turn a profit after all the expense involved in producing it. Even in the aughties, the majority of the short films I saw were all at one film festival, all in one day. Now they can be distributed with ease.

This, I think, is a really good thing for people who love (both making and watching) film.

As to ...Forgotten Detroit itself, it's a very solid 17½ minutes of artistic and introspective entertainment. It's making the festival circuit, so you can't buy a copy at the moment (we Kickstarters each got a DVD by way of thanks), but check out this guy's bio on his website: http://rickboven.com.  That's right, he's a filmmaker, an actor, an indie comic book artist (I've got several of his comics on my Kindle and some day I'm going to commission him to give 42 Months Dry the graphic novel treatment), an author, and apparently dabbles in music as well. Until recently, he also ran a small press out of Chicago, not unlike our Gut Check Press.

What's that like, I wonder? Having that many creative outlets and being talented in all of them? Here's the funny thing: it sounds just exhausting to me. I think I'd feel a kind of creative paralysis that would sap me of all energy and keep me from really exploring any of them fully. I love to try and multitask, but once more than two options appear, I suck at getting things done.

This leads me, much like PBS's illustrious Buddy the Tyrannosaurus (can you tell I have a five-year-old?), to a hypothesis: there are, creatively speaking, two different kinds of people...
And so, even if I had the talent, skill, and time to tackle them all (I don't), the thought of making a film, painting a portrait, recording an album, and writing my next novel all at once, makes me just want to sit back and watch '90s sitcoms on Netflix instead. But when I think about one project by itself, I feel my creative energy and passion growing. By the way, my next novel is tentatively called The Outside Man and, along with Demoniac, it is a dime's width away from being contracted by a giant of a publisher (but more on that in a week or so).

So, what do you think; is my hypothesis right? And, if so, which of the two types are you? And have you shifted from one to the other during your life?